This month I would like to report on the recent international neural therapy conference in Bogota, Colombia. This was a major event with close to 500 participants from all over Latin America and Europe. Neural therapists came from as far away as Turkey, but I am sad to say, only three showed up from North America.

This was an excellent conference for many reasons. The program was varied and interesting, the speakers were first rate, and the conference was run smoothly and efficiently. What impressed me the most however was the spirit of the meeting. There was an enthusiasm, a collegiality and a friendliness that made everyone feel very welcome. Much of this can be attributed to our hosts. Colombians have a reputation for being warm and friendly people, and this set the tone for the meeting.

However the participants themselves brought a great deal to the conference. The enthusiasm was palpable with the conference-hall full from the beginning to the end of each (sometimes long) day. Despite the many language groups represented (Spanish, German, Portuguese, Turkish, French, English and possibly others) there was a great deal of mixing and friendly chatter. More than one speaker referred to our common interest of neural therapy creating a big international “family”.

I could probably fill three newsletters with “pearls” that I took home from the conference – some clinical, some new research, some reassessments of old science, some new perspectives coming from information theory and lots of case studies. However for the purposes of this newsletter I will pick out a few that were for me personal highlights.

Lorenz Fischer (from Switzerland) reported on a truly landmark study of neural therapy’s efficacy in difficult chronic pain cases. This one study has persuaded the Swiss authorities to include neural therapy within the conventional therapies covered by public medical insurance, i.e. neural therapy is no longer considered to be “alternative medicine” in Switzerland!

Laura Pinilla (from Colombia) reported on research into the original writings of Henry Head, the famous 19th century British scientist known for the discovery of “Head zones” or dermatomes corresponding to various internal organs. The concept of pain referring to the skin from disturbed organs has made its mark, but generations of medical students and physicians have been frustrated by the anatomic variability of dermatomes as found in different textbooks. Professor Pinilla discovered that much of this confusion can be explained by how the dermatomes were originally mapped. For example, Head studied dermatomes by responses to pain and temperature; Sherrington’s studies used touch.

André Peralta (from Brazil) reported on carotid artery injections of procaine into 2800 patients over 11 years for treatment of strokes, epilepsy and various other neurological and psychiatric disorders. One of his more interesting observations was induction of rapid eye movements in some of these patients.

Eugenio Andrade (a biophysicist at Colombia National University) presented a fascinating talk on information in biology, particularly as it applies to embryogenesis, i.e. how biological forms take shape. He showed evidence that information to create form is not carried by DNA!

Hans Borop (from Germany) presented new research on autonomic nervous system physiology. It seems that the age-old distinctions of sympathetic and parasympathetic systems continue to decline. New microscopic techniques demonstrate parasympathetic nerve fibres reaching everywhere in the body, often following tracts long considered to be sympathetic, e.g. thoracic and lumbar “sympathetic” nerves. And sympathetic fibres are now known to be included in “parasympathetic” tracts, such as the vagus nerves.

David Vinjes (of Spain) spoke on the multiple organ effects of disturbance in the pelvic plexus. Most patients with bowel, bladder or reproductive organ dysfunction have symptoms in more than one organ. Patients presenting with complaints in one organ will not necessarily mention other symptoms and should be questioned about them. (This sounds much like the “cross-talk” I mentioned in last month’s newsletter!)

I found it fascinating how the topics presented often reflected the cultures of the presenters. For example, the German-speakers presented lectures strongly connected to science and meticulous analytic research. The Spanish-speaking presenters often explored the “big picture” – big ideas, philosophical approaches, and the relationship of neural therapy to the individual and society.

In my opinion both approaches are important and validate the concept of “international meetings”. We learn from each other and the more different our backgrounds the more likely we will discover something new. The next big international neural therapy meeting will be in Ottawa, May 12-13th 2017, with a day of pre-conference workshops. 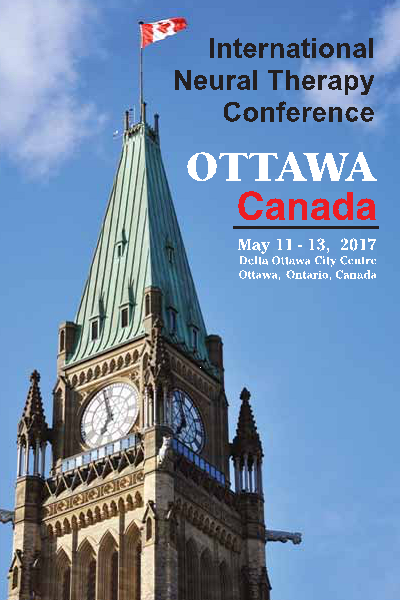 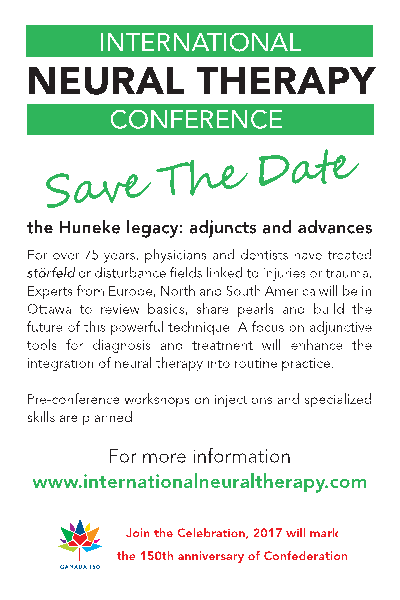