This month I would like to discuss anusitis, a common problem, but one that patients often neglect to mention unless symptoms are severe. For some reason “heartburn”, “sore throat”, and “indigestion” seem to be worthy of attention, but pain or itching of the anus? – not so much.

However this month I do not intend to discuss the anus as an interference field but rather inflammation of the anus – which can be an interference field, but which deserves treatment in its own right. Bleeding may be present (usually only on the toilet paper), itching, a clear discharge, or pain.

The anus is part of the gastrointestinal (GI) tract and its function follows similar rules, as do other parts of the tract.  Speransky’s animal experiments demonstrated that certain areas of the GI tract were much more sensitive to irritation than other parts – namely the gastro-duodenal junction, the ileo-caecal junction and the rectum.

The most direct form of irritation is the intestinal contents, i.e. the food we eat.  And as it turns out anusitis almost always is exacerbated by certain foods.  Elimination-challenge diets will often clarify this, but sometimes serum IgG or faecal IgA analysis for food antigens (delayed food sensitivity testing) can be helpful.  This is particularly true if the anus is reacting to a variety of foods.

(Allergists generally discount food sensitivity testing because of the number of false positives and false negatives. However as long as these limitations are taken into account, the results can still be helpful. The best policy is to test the lab results by sequential elimination-challenges of the suspect foods.)

Most cases of anusitis will improve by elimination of the offending foods. However some will persist.  In that case, the general health of the GI system needs to be assessed.  Hypochlorhydria, parasites, intestinal dysbiosis and other forms of dysfunction need to be ruled out and/or treated.

However a recent case reminded me of the importance of systemic factors whenever inflammation persists.

A 63-year old woman presented with painful anusitis and bleeding.  Neural therapy gave temporary relief, and food sensitivity testing and elimination of offending foods quieted her symptoms somewhat. Attention was paid to diet, digestion and correcting dysbiosis. However she continued to have relapses, especially when under stress.

During a particularly painful period, the interference field at the anus was challenged by autonomic response testing with mercury and DMPS.  (Twenty years previously the patient had a debilitating facial pain syndrome, which was cured over a period of several years by amalgam removal, dental reconstruction and mercury detoxification.) A clear response was obtained so the patient was given an intravenous bolus of 250 mg DMPS in addition to the usual neural therapy of the anus. 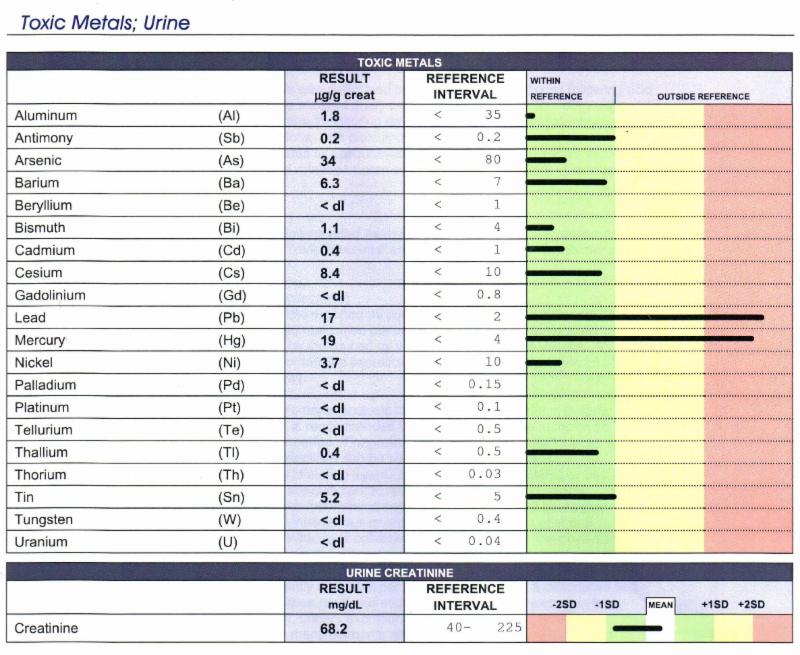 Most teachers of neural therapy warn their students that if several interference fields are found in one session, that the presence of a neurotoxin should be considered.  Toxic metals are among the most common. This principle is also true in the presence of inflammation, whether systemic as with arthritis, or local as with anusitis. In either case detoxification should be instituted.

I find it interesting the physicians who treat Lyme disease have come to a similar conclusion: that toxic metals need to be removed if systemic inflammation is to be  controlled.

Getting back to anusitis: neural therapy is a useful treatment for anusitis but generally requires treatment of perpetuating factors for lasting success.

5 years ago I had a 65 y/o patient with a painful big toe. X rays showed Hallux rigidus.

I treated the TP with good results, but the main interference field of this patient was the liver.  I discovered he had a liver cancer.

I absolutely agree with you, liver should be kept in mind with this kind of pain when trauma has been ruled out.

Nothing happens by accident and a long time patient came in just a few days after I received this newsletter with exactly this problem.

Trigger point was in the tibialis anterior muscle.  and injection with prolozone to this area resolved his painful big toe.   There was no interference field of the liver.

He has had a new job for the past several months as a driver and the relatively new use of his right foot in driving much more that he had likely resulted in his symptoms.  When his family physician noted normal uric acid levels, there was noting else she could offer other than NSAIDS which he did not want to take.

Thanks again for a reminder to “dust off” this two volume set of books from my shelf!

As usual an excellent article. I didn’t know the one about the meridian projection to the first toe.

Another one to add is vascular problems – not just peripheral vascular disease but also arterial thrombembolism that may occur at any age. Depending on the degree of stenosis, symptoms can be rather varied; the toe affected may just be “the last meadow”. Amazingly enough it is possible to walk about without claudication with a stenosis of  > 80% of the common femoral artery.