Kidney as an Interference Field

Kidney as an Interference Field

This month’s topic is kidneys as interference fields.  Kidneys are hardy organs; they seem to tolerate the stresses of modern life quite well and are easily overlooked in the search for interference fields. Part of the reason is that they seldom express pain and do not usually declare serious trouble until renal failure is looming.

Renal failure is the 12th leading cause of death in the world (9th in the US).  Diabetes and hypertension are the most common underlying causes. Yet, stress on the kidneys can manifest even in those who are not seemingly at risk, and can be quite subtle.  The neural therapist can detect these stresses through energetic testing and neural therapy can play an important part in resolving them.

Although kidneys are best understood as excretory organs, they have two other functions that may signal stress when compromised.  One is regulating blood pressure.  The other is regulating water and minerals in the extracellular space.

Essential (or idiopathic) hypertension is said to account for 90 to 95% of cases of high blood pressure.  Personally, I dispute that figure because I have seen many patients with “essential” hypertension respond to improvement in diet, (including removal of sensitizing foods), exercise, weight loss, supplemental magnesium, vitamin D and last (but not least) treating periodontal infection, amalgam removal and mercury detoxification.  This last factor is one that not uncommonly can be found by searching for kidney interference fields. (Amalgam in the mouth does not necessarily cause hypertension; but if kidney interference fields are found and autonomic response testing indicates mercury to be a stressor, the case for a causal relationship becomes strong.) Of course, treatment requires more than just neural therapy of the kidney(s), but also a comprehensive detoxification plan.

I have had the privilege of treating a number of biological dentists over the years and hypertension is a common problem.  Even though they may not be placing amalgam fillings, the exposure to mercury from removal of old amalgam puts them at risk and hypertension is not uncommonly the result. In my opinion all biological dentists should be checked regularly for signs of mercury poisoning, for the sake of their kidneys, if nothing else.

The second common “red flag” for kidney stress is fluid retention.  This is a generalized “puffiness” involving the whole body, different from the dependent oedema of congestive heart failure and the cyclical fluid retention associated with the menstrual cycle. This can occur long before the renal failure of nephrotic syndrome and is often associated with kidney interference fields.

So where do kidney interference fields come from?  In some cases a history can be obtained of past pyelonephritis, renal stones and/or obstruction.  Far more common, in my experience, is current stress from mercury.  The kidneys retain more mercury than any other major organ in the body*.  Renal failure from mercury appears to be rare, but in my opinion is likely under-diagnosed.  I have seen two cases of nephrotic syndrome related to mercury (both of which were missed by the nephrologist).  In one, amalgam removal and detoxification of mercury resulted in a permanent cure.

Typically symptoms begin after dental work involving amalgam, either placement or removal of old fillings. One or both kidneys can be identified as interference fields and neural therapy results in an immediate response – diuresis and reduction of tissue fluid retention. Although relief is obtained, treatment should not stop with neural therapy.  If amalgam is still present in the oral cavity, it should be removed and a detoxification program initiated.

A third (uncommon) red flag for renal stress is presented in this recent case from my own practice:

A healthy 65-year old woman presented with bilateral swelling of her lateral ankles in the space just below the lateral malleoli, of several months duration.  There was no immediately preceding history of trauma or strain, but over a lifetime she had experienced a number of ankle sprains and injuries to the forefeet and distal calves.  Physical examination of the feet, ankles, legs and pelvis revealed only minor somatic dysfunction and osteopathic manipulation resulted in no change in the swelling.  What made this case unusual was that the swelling was bilateral and involved the same space (below the lateral malleoli) in each foot.  Because this space contains three kidney acupuncture spots, the kidneys were checked for interference fields by autonomic response testing.  Sure enough, touching the left kidney caused indicator muscle weakening, which could be reversed with the presence of mercury.  It was at this point that the patient volunteered that she had had a large amalgam filling placed (almost a complete crown) a few months before. 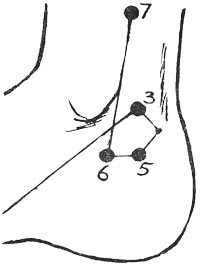 All three of these examples of kidney interference fields were triggered by the stress of mercury.  No doubt there are many other causes, (not least nephrotoxic medications), but the close connection of teeth to the practice of neural therapy and the (alas) still common usage of dental amalgam should raise awareness of kidneys as potential interference fields.

* According to an unreferenced statement in  http://www.arltma.com/Articles/MercuryToxDoc.htm “in postmortem samples from mercury mine workers in Yugoslavia, the highest concentration of mercury was found in the thyroid and pituitary glands, suggesting that retention may be higher in these organs than in the kidneys.”