When is a hip pain not a hip pain?  The answer is: when the pain is coming from somewhere else.

Hip pain is not alone in this regard.  Chronic pain often surfaces in locations far from its origin. However pain felt in the hip is (in my opinion) one of the more poorly diagnosed.

Most physicians are aware that hip pain is unlikely to be caused by problems in the hip itself. For example the pain of hip osteoarthritis is generally diffuse, radiates down the anterior aspect of the thigh and is much affected by hip movement.  Pain from the piriformis muscle (See newsletter Vol 1, No. 3) is felt behind the hip and in the low back, although it too may radiate down the leg.

Other hip problems are reflected in disturbed hip mechanics, which are identified when testing the hip’s range of movement: flexion, extension, ad/ab-duction, and rotation.  When no mechanical disturbance is found and particularly when there is tenderness over the greater trochanter, the diagnosis often becomes (by default) “trochanteric bursitis”.

Fortunately the term “trochanteric bursitis” is finally falling out of fashion.  Evidence is accumulating that no bursitis exists in most of these cases.  The new term to describe pain over the hip, associated with tenderness, and often relating to overuse, leg length discrepancy, etc. is “greater trochanteric pain syndrome (GTPS)”.

This is a welcome change.  In my opinion, the suffix “-itis” is attached to too many structures when the only physical finding is tenderness.  Tenderness can be referred, just as is pain.  Hackett demonstrated that hip pain may be referred from a trigger point in an irritable iliolumbar ligament.  Of course iliolumbar pain may also refer to the groin, testicle and proximal medial thigh. 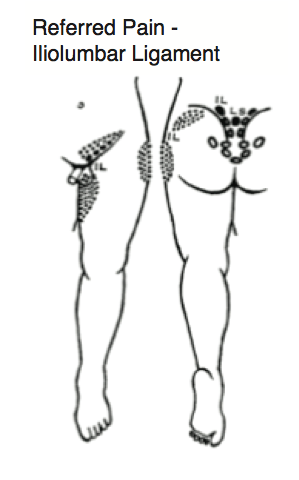 Hip pain from these sources can be treated by injecting procaine directly into the trigger points or by segmental therapy (quaddles of dilute procaine over the affected ligament or muscle).  However lasting relief requires that the causes of the trigger points be addressed as well e.g. addressing somatic dysfunction in the pelvic ring, the legs, the lumbar spine or even remote areas of the body.

Another less common (but important to its owner) source of hip pain is referral from an interference field in a low thoracic paravertebral sympathetic ganglion.  These usually occur in more complicated cases where neurological signals are contributed from interference fields in other associated tissues or organs.  Here is a case example:

An 80 year old woman complained of hip pain since a fall on her side about 2 months before.  Somatic dysfunction of the pelvic ring was identified and treated using osteopathic-type manipulation. However on follow-up a few weeks later the patient reported no change in her pain.  This time she was accompanied by her son who corrected his mother’s history, stating that she had fallen 6 months previously and that she actually had some pain even before that.  In fact she had “not been right” since a gynecological operation that had been complicated by infection and a long convalescence several years before.

No interference field could be detected in the surgical scar or pelvis, but an interference field was found by autonomic response testing at the left T10 sympathetic ganglion. It was treated with a Tenscam device with satisfactory resolution of her pain within days. (The classical neural therapy treatment would have been injection of the ganglion with 10cc of dilute procaine. See page 186 of my book for details of technique.)

The new descriptor of localized hip pain “greater trochanteric pain syndrome” is an improvement over the older (and misleading) term “trochanteric bursitis”.  However it gives little help in understanding etiology.  Understanding the structures that refer pain to the hip is the key to successful treatment.